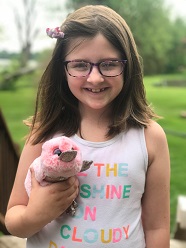 Dana Horak trusted her instincts about her daughter’s back issue, which started the journey of navigating scoliosis diagnosis and treatment.

She took Alaina to the doctor in August 2018 when she noticed Alaina’s right shoulder jutted out farther than the left shoulder. Initially, Dana thought she might be overreacting, but the physician knew right away that Alaina, who was 7 years old at the time, had scoliosis, a spinal deformity that causes a curved spine.

X-rays and an MRI confirmed the diagnosis, and Alaina was referred to Dr. Fred Sweet at Rockford Spine Center. Because the curve was significant (43 degrees), Alaina didn’t qualify for treatment using a brace – she needed surgery.

Dr. Sweet recommended growing rods, which are metal rods placed next to the spine using a surgical technique that does not fuse the spine. The rods are anchored at the bottom of the curve, and loops of cable are attached to the spine so as the spine grows, the cables slide up the rods.

“That allows the spine to be straightened much more than could be done with a brace and allows the child’s spine to grow to adult proportions,” Dr. Sweet explained. Not treating the curve with surgery could cause the curve to worsen, resulting in “serious disfigurement and other medical issues,” he said

Dana and Alaina live in Elkhorn, Wisconsin, so insurance was initially reluctant to cover the surgery across state borders. Approval came just the week before surgery was scheduled.

“It was really not an option to go with anyone else. Dr. Sweet and his team worked really hard with us to be able to have the surgery in Rockford,” Dana recalled.

About 4 in 100 adolescents have scoliosis, according to the Scoliosis Research Society, but the diagnosis was still overwhelming for Dana. She had never known anyone with scoliosis, so she did research but still worried about the surgery and tried to prepare Alaina the best she could.

“My fear was that she wasn’t in any pain but that I was setting her up for a lifetime of pain,” she said. “Alaina is very easygoing. If you tell her something, she just kind of rides with it. Her being that way made me confident we were doing the right thing.”

A friend in surgery

Alaina had growing rods implanted during a four-hour surgery on Dec. 6 in Rockford. She brought along her favorite stuffed animal, Wilma the platypus. Dr. Sweet told Alaina that Wilma’s back wasn’t as straight as he’d like it to be, so he also placed growing rods in Wilma the playtpus. They gave Alaina an X-ray of Wilma as a souvenir.

Early recovery was tough for Alaina. The post-surgery pain medication made her sick and she was in a lot of pain for the first few days, but Dana said the hospital staff was responsive and helpful. Alaina also had to start wearing a back brace right away, and the adjustment was difficult.

After a week, “everything was uphill,” Dana said. Alaina went home after a few days in the hospital and started improving with each day that passed.

She returned to school at the end of January. Alaina had to wear her brace during the school day and couldn’t participate in recess or physical education. Dana, who’s a teacher’s aide at the school Alaina attends, said they met with Alaina’s teacher and classmates before she returned.

“Everybody was just awesome,” she said. “They were worried about her, but they put her at ease. She was not nervous to go back to school. That made me happy that I knew she was in great hands.”

Alaina continues to improve after surgery. She had a follow-up visit with Dr. Sweet in April, and he cleared her to participate in recess at school (as long as it’s not wet or slippery outside). She has to be careful with the playground equipment – she can go on the swings but not the monkey bars – because falls can be especially painful.

Dana said Alaina has accidentally fallen twice at home, once with the brace on and another time with it off. It took Alaina awhile to catch her breath and recover.

Alaina has to wear her back brace during recess and if she’s playing outside at home. She’s cleared for swim lessons and returns to see Dr. Sweet in October for a progress check.

The growing rods surgery won’t be her last. Once she’s older, likely between the ages of 12 to 14, she’ll need another surgery to implant screws and rods to fuse her spine. Normal growing rods require surgery every four to six months to lengthen the rods, but Dr. Sweet developed a technique where the rods don’t need to be adjusted for several years at a time, if at all.

“We don’t really know what’s ahead, but we trust Dr. Sweet. He hasn’t led us wrong yet,” Dana noted.