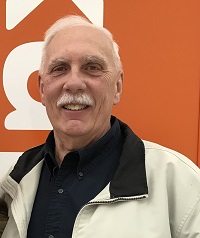 Mark McDonnell could hardly walk or drive because of intense pain along his right side for several months in 2018.

The 67-year-old Davis Junction resident worked as a retail store manager, and the pain was so severe it made him nauseous after a long day of walking and being on his feet. Doctors initially thought he might be suffering from sciatica, which is nerve pain that can run from the lower back through the hips and legs.

“I could hardly walk to the car and get it in,” he recalled. “It kept getting worse and worse.”

An MRI revealed Mark had spinal stenosis caused by a large, degenerative cyst on his L4-L5 vertebrae along his lower back. His daughter, Amanda Richolson, works at SwedishAmerican Hospital and recommended that he make an appointment with Rockford Spine Center’s Dr. Christopher Sliva for further treatment.

Dr. Sliva explained that a degenerative cyst develops when there is weakening of the ligaments that hold the bones of the spine together. The balloon-like cyst grows through the weakened area as it fills with synovial fluid, which provides lubrication to the joints. It can put pressure on the spinal nerves and cause pain, numbness and weakness.

“This is a common and fixable problem seen in patients with some forms of spinal arthritis,” Dr. Sliva said.

The first steps in Mark’s treatment involved trying to dissolve the cyst with pain injections. Those provided some initial relief, but the pain returned, so Mark opted for surgery. Dr. Sliva performed a transforaminal lumbar interbody fusion (TLIF) in May 2018. It’s a minimally invasive procedure that involves little downtime.

When he woke up from surgery, Mark felt immediate relief – the pain was gone. He went home the next day.

After about two months, he returned to work with minor restrictions. Bending and lifting, especially in a repetitive manner, was limited for about three months. Dr. Sliva also wanted Mark to mindful of not overexerting himself for the first year after surgery.

“I really behaved myself,” Mark said. “I followed Dr. Sliva’s instructions, and my follow-up visits were very good. He said I was a model patient.”

“Mark did great, in large part due to his following post-operative instructions and protocols,” Dr. Sliva noted. “While the surgical procedure is vital, it is only part of what contributes to an excellent outcome.”

Mark said he still prioritizes listening to his body. “I’m careful. When I start to get a little sore or think I shouldn’t do more, I quit.” He retired in March 2019 after 50 years of working in the grocery and retail industries, and he looks forward to traveling more in the coming years with his wife.

Since retiring, he’s also lost about 30 pounds, which has helped his back and overall health. Looking back at his experience, he’s grateful for the expertise and compassion he observed at Rockford Spine Center and at SwedishAmerican Hospital.

“Dr. Sliva is the best,” Mark said. “The staff (at RSC) is just phenomenal. If I had any questions or concerns, they had the answers for me. I just highly recommend them. At the hospital, I was like a king. Dr. Sliva and (Physician Assistant) Brad Wolf would check on me regularly. You couldn’t ask for anything better.”