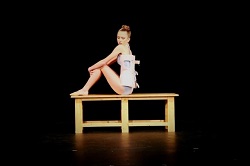 A routine pediatrician visit back in 2015 led Taylor Brown to not only learn about scoliosis but also educate others about the condition through her love of dance.

Taylor, now 15, was diagnosed with scoliosis, or a curved spine, during a doctor’s appointment shortly before she started sixth grade. Her physician referred her to see Dr. Michael Roh at Rockford Spine Center.

After an X-ray, Taylor was told early on she’d need to start wearing a brace to help prevent her spine from curving more – not exactly the news she expected.

“We were shocked,” said Kari Brown, Taylor’s mom. “It felt like it came on quickly. We thought we would have noticed it, but we definitely saw it at the doctor’s appointment, and in photos you can see where one hip is higher and protrudes more. We never noticed it that summer.”

Taylor said she “really had no idea” what scoliosis was. She was concerned about having to wear the brace and whether she’d need surgery and how everything would affect dance classes, which she’d been taking since the age of 3.

Kari said Dr. Roh assured them that most children don’t lose their quality of life and that Taylor could remove the brace for dance. Taylor faced the diagnosis and treatment head-on and wore the brace religiously.

“This girl was so diligent about wearing that brace, I was amazed,” Kari recalled. “She wore it all night, every night, even during the hot months when school wasn’t air conditioned. She didn’t want to risk taking it off.”

Dr. Roh noted that studies have shown that bracing is very effective, but only if patients wear them. “Taylor was extremely compliant with her brace, which certainly contributed to her success.”

Taylor ended up getting two custom braces made for her because she was still growing so rapidly. Early on, it was a struggle to become comfortable with wearing the brace.

Students at Taylor’s school were supportive and didn’t make fun of the brace but, rather, were curious about it, giving Taylor the chance to help them learn more about scoliosis.

Taylor’s S-shaped curve was about 30 degrees, which made her a good candidate for the brace. Dr. Roh told her she’d need to wear it for about three years. Because of her dedication to the treatment plan, she was able to stop wearing the brace after about two and a half years.

“After her first checkup, Dr. Roh told her she’d have to wear the brace a lot tighter,” Kari said. “After that, he was always telling her how proud he was of how she was wearing it. And he talked to me, too, about letting her learn how to wear it and remove it on her own.

“When she got the OK to stop wearing it, he said, ‘Taylor, unfortunately you’re going to have to get used to not sleeping in it.’ Both of our jaws just dropped.”

Helping others through dance

The Browns live in Rock Falls, and they were able to see Dr. Roh for some appointments in nearby Sterling thanks to his partnership with CGH Medical Center. Taylor said the brace did help with back pain after long nights of dance practice at Woodlawn Dance Academy. 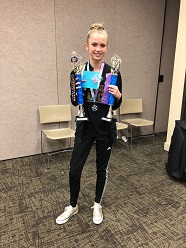 Last year, she decided to incorporate her scoliosis journey into a dance routine, which included her wearing her brace for part of the number. She performed the dance at three different competitions in spring 2018; at the third event, she placed fourth out of 47 dancers and earned a stage presence award.

Taylor received several compliments on the dance and one judge highlighted the emotions she showcased with the routine. Her parents and her dance family were so proud of all she’d accomplished.

“She gets straight A’s and is very self-disciplined,” Kari said. “She always works hard and does her best.”

They are also thankful for Dr. Roh and his team for being “personable, positive and explaining things so thoroughly.”

“I trusted him, and that’s all I needed,” Kari said.

Dr. Roh said Taylor should lead a healthy and pain-free life. He was inspired by Taylor’s efforts to take control of her experience with scoliosis and express herself through dance – he’d never heard of anyone doing that and incorporating the brace itself. “I think it was genius!”

“Her small scoliosis should not cause pain, nor will it be noticeable to anyone who looks at her back,” he said. “Long-term studies of children with adolescent scoliosis show no greater risk of back pain in adulthood than the average population.”