Father gets back to living, free from spine pain and opioids
Posted on: April/05/2019 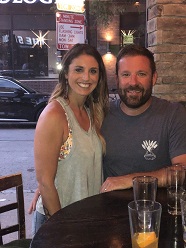 Zeb Lappin easily recalls the day his back went out – Oct. 13, 2013. He was working out doing squats when something happened that caused excruciating pain.

Working in the major appliance industry, he had occasional back pain before, but it was nothing like this. He consulted with two doctors before going to Northwestern Memorial Hospital in Chicago. That’s where his mother had back surgery years before. At Northwestern, the doctor performed an open microdiscectomy surgery to repair a herniated disc. Because it was open spine surgery, recovery took a long time, and his scar healed poorly.

Zeb’s pain relief didn’t last long – in 15 months, it returned. This time, he woke up with intense right leg pain and could barely walk. His wife took him to the emergency room. What followed was a series of visits to find a doctor he felt confident could help him.

The pain gradually subsided, but he had developed foot drop – the inability to lift the foot upwards at the ankle. “I was kind of confused, because the pain mostly went away, but I felt pressured to have surgery,” Zeb said.

This time, the surgery took place at Rush University Medical Center. Doctors there used a minimally invasive technique to remove a shattered disc. During surgery at Rush, he had a spinal fluid leak, a complication that can occur during revision surgery. At first, the surgery seemed to provide relief, though the foot drop was unchanged. However, he had flare-ups of pain every 2-6 months and began seeing a pain management specialist who offered injections and narcotic pain medication. Though the narcotics allowed him to keep working, they simply masked the pain and caused other unpleasant side effects.

In March 2017, it happened again. While attending his daughter’s basketball game, he once again found himself in excruciating pain and unable to stand. “I was in a lot of pain, and after a few weeks, I felt like I was getting blown off by doctors,” he said.

He happened to talk to a friend who had recently had minimally invasive surgery with Dr. Michael Roh at  Rockford Spine Center. The friend’s surgery was a huge success and he was already back to running.

That convinced Zeb to make an appointment with Dr. Roh. “I felt comfortable talking to Dr. Roh and I didn’t feel pressured like I did in Chicago,” said Zeb. “He took his time with me and I didn’t feel rushed out the door like I had felt with so many other doctors.”

Dr. Roh explained that after multiple disc herniations at the same level, a lumbar fusion is the more permanent solution that is recommended. He says, “Zeb was reluctant to have a fusion, just based on things he had heard from other people. Nonetheless, it was the correct surgery for his situation.” Fortunately, he recommended a minimally invasive transforaminal lumbar interbody fusion (TLIF), which is an outpatient surgery with a shorter recovery; Dr. Roh is the only spine surgeon in the area that routinely performs this surgery. Zeb liked the idea that it was a less-invasive procedure and that Rockford Spine Center was so close to home. The surgery went smoothly, with no spinal fluid leak. Following the procedure, Zeb was allowed to resume heavy lifting after two months. He followed the entire recovery plan recommended by Dr. Roh and was able to return to his regular work duties, including moving heavy appliances.

Today, almost two years after the procedure, Zeb hasn’t had any flare-ups. Best of all, he could stop taking pain pills shortly after surgery. “I feel like I got my life back,” said Zeb. “Leaning on opioids and pain pills is a terrible way to live. You’re always in a cloud, and I know I was kind of a bear to my family.”

After all he’s been through, Zeb said he knows that he’s not 100 percent and will never be. He has since changed jobs to prevent any further injury to his back. He’s also recommended Dr. Roh to several people. In fact, his mother had surgery at Rockford Spine Center just last fall.