RSC doctor flies plane to Canada to help CEO with back injury
Posted on: April/05/2019 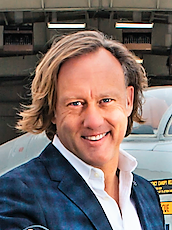 Jeff Kaney’s business is aerospace but he never expected an airplane ride to be crucial to his recovery from a back injury.

Kaney, CEO of Kaney Aerospace in Rockford, struggled with back issues on and off for many years. Dr. Fred Sweet of Rockford Spine Center performed his first surgery, a discectomy, on a herniated disc in April 2017. A day after surgery, he was able to attend a local fundraiser and even spent time on the dancefloor.

After about eight weeks, he started feeling pain again, but the pain was manageable with physical therapy (thanks to RSC Physical Therapist Kim Alexander) and exercise. Herniated discs have a small percentage – about 15 percent – of reoccurrence, Dr. Sweet said. Kaney was part of that unlucky group.

In addition to running his business, Kaney is a part-time air show pilot. He flew in six shows in 2018, including one in Ontario, Canada in September. It was in Canada that his back pain turned from manageable to terrible.

“I flew up there on a Thursday, woke up on Friday morning and fell to the floor after getting out of bed because of the pain,” he recalled.

He managed to get dressed and stay seated while attending an air show briefing later in the day, but the pain – both in his back and his right leg – became more extreme. It was the “worst I’d ever felt,” he said.

On Friday evening, he went to a local hospital emergency room but providers only gave him a prescription steroid. Because of Canada’s universal health care system, Kaney was unable to access the urgent care needed for his back.

By Saturday, the pain was still so intense, there was no way he could fly the plane home he had brought to Canada. His only options were to charter a plane home or take an ambulance all the way back to Rockford.

Enter Dr. Sweet, who is pilot and has been flying for more than a decade. Dr. Sweet flew his own plane with Kaney’s wife, Nancy, who is a pilot for a major airline, that same day to Canada. They retrieved Kaney, and then flew back to Chicago. Kaney was in so much pain that only laying down was comfortable, so Dr. Sweet removed the plane’s rear seats so Kaney could stay flat for the ride. Dr. Sweet had to sedate him for the travel because the pain was so bad.

They hit a minor snag upon realizing that the U.S. Customs airport office would likely be closed by the time they returned to the U.S. Dr. Sweet called ahead and told officials he was bringing home a patient. He landed the plane around 12:30 a.m. Sunday at Chicago O’Hare International Airport, and a customs official met them on the ramp. Kaney remembered the person shining a flashlight in the back of the airplane.

“He said, ‘You weren’t kidding, you do have a patient back there!’ He looked at all three of our passports and let us go. I don’t think the engines were shut down more than five minutes,” Kaney said.

A few hours later, he checked into SwedishAmerican Hospital, and Dr. Sweet performed surgery to fuse his spine on Monday morning. He remembered waking up from surgery and the pain being totally gone.

Post-surgery, Kaney said he feels phenomenal. “It’s the first time I’ve been pain free in a year and a half.” He’s also appreciative of Dr. Sweet and the adventure involved with his treatment.

“Fred and I bonded many years ago over flying, and we’ve flown together in many different planes. I’m so grateful for what he did,” Kaney said.