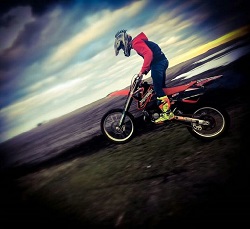 You can’t keep Kaleb Stewart down now that surgery addressed the back pain the 18-year-old had been living with for a few years.

Kaleb’s mom, Patty, said he first complained of back pain around age 13. She initially thought it was growing pains – he was going through a growth spurt and was also an avid dirt bike rider. Kaleb said the pain would vary from sharp to numbness and tingling that would travel all the way to his feet.

He was an active kid who’d played baseball since a young age, but the pain forced him to the sidelines.

“I don’t think people always believed him,” Patty explained. “They’d make him sit out because he couldn’t run before practice. My husband and I felt terrible because he was suffering for so long and we weren’t sure what was going on.”

The family learned one of Kaleb’s vertebra had slipped forward onto the bone below it, a condition known as spondylolisthesis. The condition was causing the symptoms Kaleb described, as well as kyphosis (rounding of the back) and spinal stenosis, or narrowing of the spinal canal. A fall or minor injury could have caused serious or permanent damage.

“Dr. Sweet told us he was born that way,” Patty said. “When he reached a certain age, that’s when the pain and symptoms started. The bones had shifted so far out of the way that pain shots or therapy wouldn’t help at all.”

Spondylolisthesis affects about 12% of the population, Dr. Sweet noted, but the congenital type that Kaleb had was rare. With these cases, individuals typically become symptomatic as juveniles and teenagers. Common symptoms include difficulty standing erect with very tight hamstrings, and back and leg pain. In severe cases, posture is somewhat pitched forward with the knees slightly bent, and walking endurance may be very limited.

“Most ‘slipped vertebrae’ are degenerative in nature and develop late in life,” Dr. Sweet said. “Kaleb had a congenital abnormality that led to his particular type of ‘high-grade’ slip – the spine was almost completely falling off the pelvis. These are very debilitating and also technically demanding to fix.”

Surgery is helpful but risky, so Dr. Sweet said Kaleb’s parents acted appropriately in trying nonsurgical options first. He performed a transforaminal lumbar interbody fusion, or TLIF, on Kaleb in February 2019. This was the first major surgery Kaleb had been through, and he remembers waking up and realizing the back pain was gone.

“I was in the hospital for two days. The first week, it was kinda painful but then I started doing really good after that and walking good,” Kaleb said.

Kaleb did physical therapy for about a six weeks after surgery. At a follow-up appointment after surgery, Patty told Dr. Sweet she was “having trouble keeping Kaleb down.” 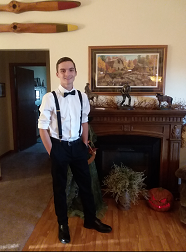 “I just let him go. He’s experiencing life without pain for the first time in five years – who knows what he can or can’t do now,” Patty explained.

Patty said the family “loved Dr. Sweet from the beginning.” He pulled Kaleb out of gym class before the surgery and emphasized that he be extra cautious on the ice and snow back in February.

“He was straightforward, told us exactly what was wrong. Our options were limited, so we knew we had to act on this quickly. He put Kaleb and me at ease.”

Kaleb carries a card in his wallet explaining that he has eight bolts and two rods in his back – in case of emergency or if he’s traveling and needs to go through a metal detector. But he’s back to riding his dirt bike and working at a grain elevator, where he climbs 200- and 300-foot elevators “like it’s nothing.”

Dr. Sweet said he doesn’t anticipate any long-term complications and no restrictions for Kaleb.